Save Your SearchRefine Search

Orleans was first settled in 1693 by Pilgrims from the Plymouth Colony who were not happy with what the soil conditions that they found in Plymouth. The town was incorporated in 1797 and named for the Duke of Orleans in remembrance of Frances’ support for the colonies during the American Revolution. Fishing, whaling and salt works were early industries with tourism taking hold in the mid-19th century. In late 19th century the transatlantic cable was brought to Orleans and helped facilitate communication between Europe and America.

During President Kennedy’s administration in the early 1960s the National Seashore was created that and spans 43,607 acres on the outer cape. It includes nearly 40 miles of Atlantic-facing seashore in the towns of Orleans, Chatham, Eastham, Wellfleet, Truro and Provincetown. Additionally the National Seashore features ponds and woods. It is a national treasure offering recreation and enjoyment for all.

Below, browse all real estate for sale in Orleans! Contact us with any of your real estate needs.

Register to save your favorite properties as you search.

This one-bedroom, one-bath unit on the third floor of the Hancock III building is easily accessed by an elevator. The slider off the spacious living room leads to a peaceful balcony. The bedroom offers ample closet space and large windows allowing the natural light to shine in. The bathroom is next to the bedroom, complete with a washer/dry unit. The kitchen has a nice layout with a lot of cabinet space. The complex has a swimming pool and clubhouse for your entertainment.

Large 5 bedroom, 5 bath home convenient to Nauset Beach and town. First floor has a large open living room with cathedral ceilings, formal dining room with butler's pantry, primary en-suite bedroom, plus bedroom #2. There is a second full bath off the oversized kitchen area, as well as first floor laundry room. 3 Season porch with high ceilings overlooks the spacious back yard. Second floor has another living area, as well as 2 more en-suite bathrooms. The second floor also includes bedroom #5 and a bonus space with full bath in the hall. Second set of stairs lead you down to the side patio and back hall. 7 zone high efficiency forced hot water heating system. Outdoor shower to rinse off after the beach. Relax outside on the large stone patio and enjoy the ample yard and outdoor shower. Welcome to 18 West where the owner of this 2nd floor unit proudly displays the timeline of his career as a wine importer. A gas fireplace creates a warm ambiance to pair with a glass of wine while the balcony just off the living area is perfect for a breath of fresh air. 18 West Road offers independent living in the heart of Orleans. This 62+ community has several rooms for socializing and dining with friends. A library, garage, round-the-clock concierge, exercise room and a first floor guest suite complete this package. 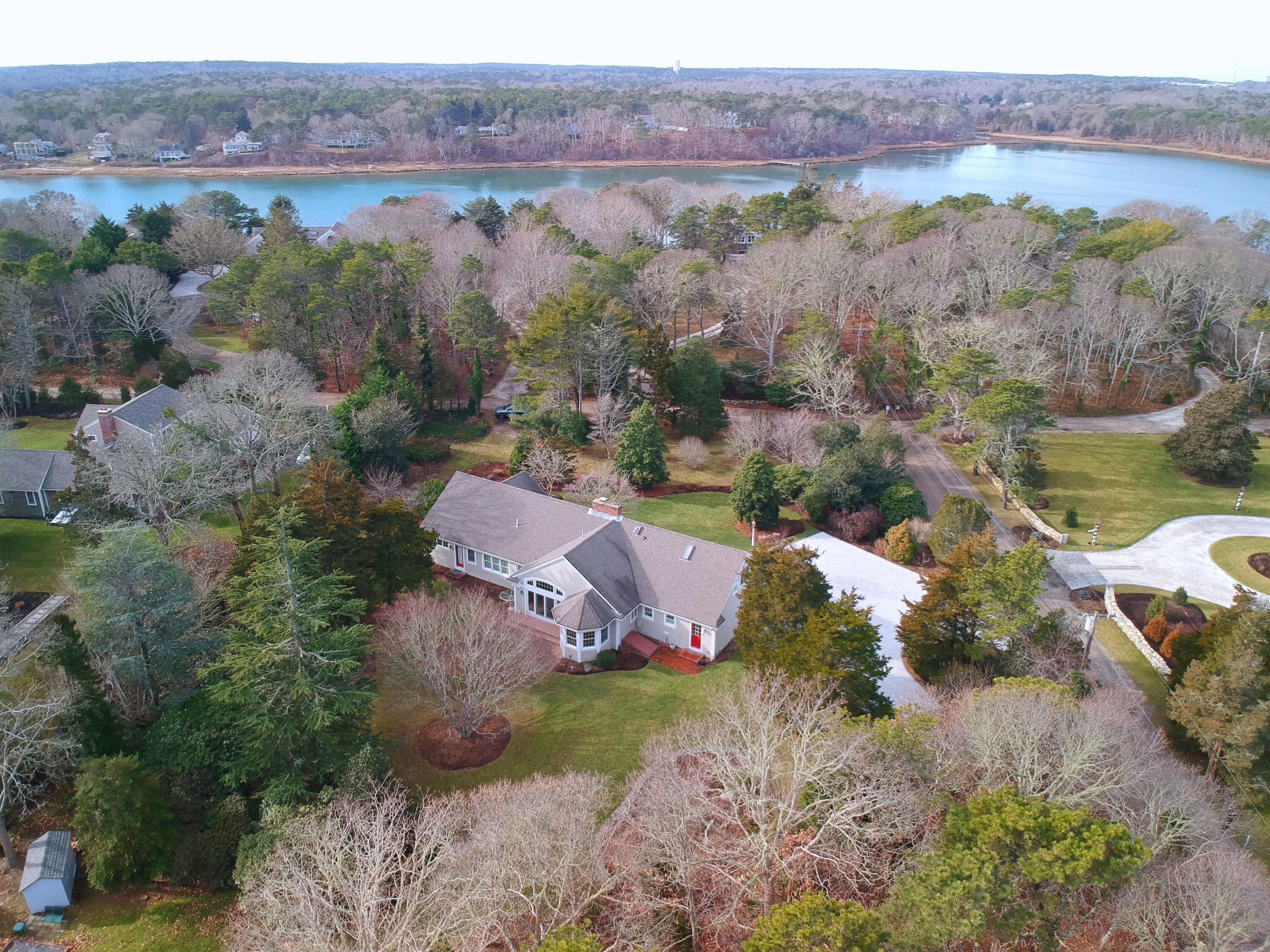 Jack Knife Point is a secluded, sought after enclave of luxury homes in a pastoral setting with superb saltwater access to Pleasant Bay. 29 Jack Knife offers 3,000 sq ft of casually elegant living space, privately sited on an acre of exquisitely curated grounds so horticulturally stunning as to evoke the sense of strolling through an arboretum. A redesign of the home in 2008 by architect John Kelsey now provides a beautifully proportioned main level encompassing a cathedral great room with fireplace, open kitchen with sunny breakfast nook and pantry, extraordinary fireplaced dining room, a secluded and tasteful primary bedroom suite and two guest bedrooms. Random-width wood floors, built-ins, custom millwork and generous fenestration make the home warm and inviting. The 2nd floor is comprised of a bedroom suite and a huge unfinished attic for potential extra living space. Excellent mechanical condition, huge dry basement, ac, generator, irrigation well, etc. The spectacular grounds offer vistas from every room and numerous pool siting options, there's even a bocce court! Association beach and mooring field on Pleasant Bay for swimming, paddling and boating are around the corner. Completely restored (2019) Cape Cod farm house. This house was restored preserving the original integrity while adding today's modern amenities. 4 Bedrooms with 2 first floor primary suites and 2 second floor Bedrooms which share a Bathroom. The open floor plan flows beautifully with wide pine floors to a completely updated kitchen boosting new Kitchen Aid stainless steel appliance's, a large island along with plenty of counter space is covered with with a quartz top and a subway tile backsplash. Bathrooms have all been updated with Marble floors, white Quartz vanity tops. First floor laundry.A beautifully landscaped yard is aided by care free irrigation system along with an outdoor shower to rinse the sand off after a day at Nauset Beach 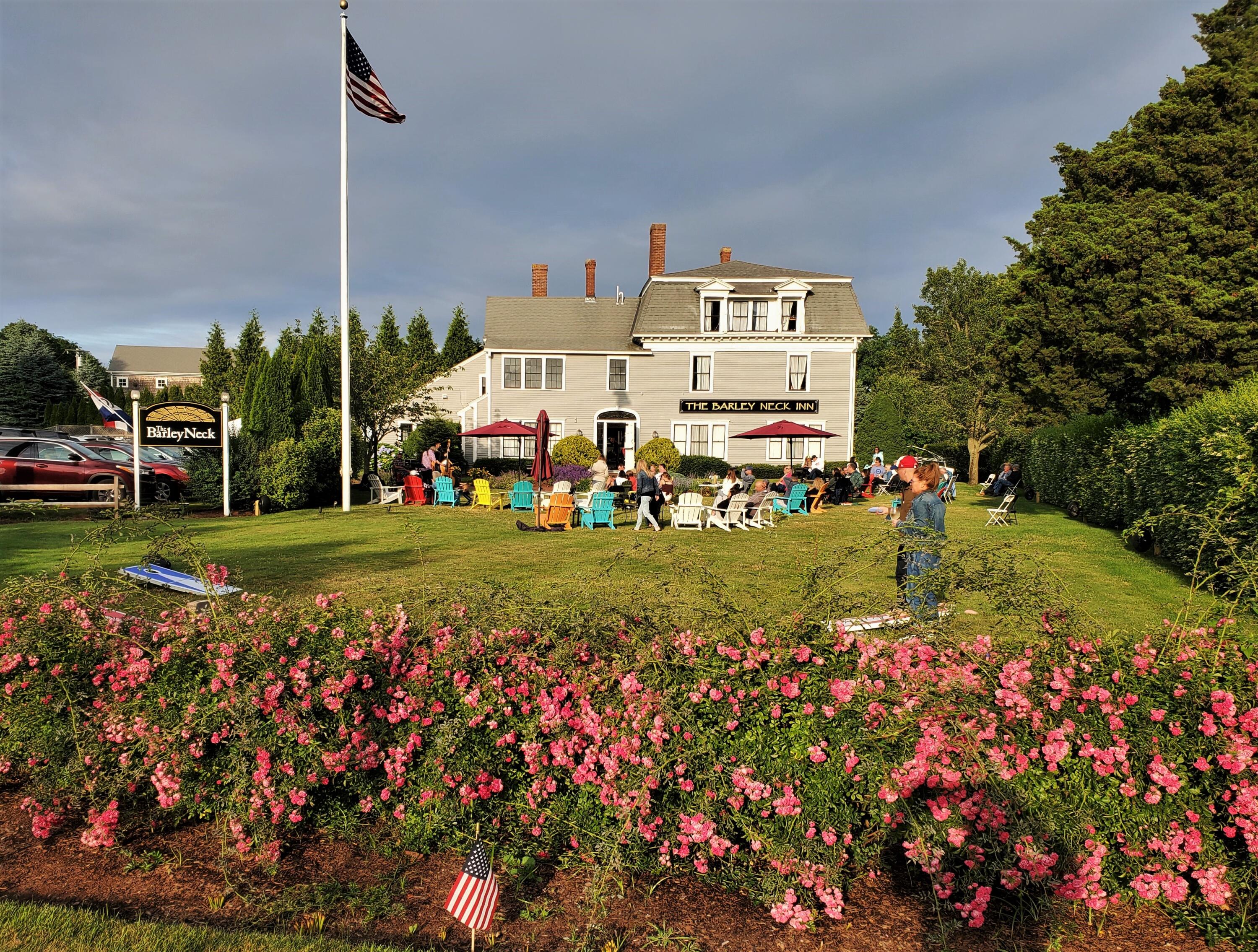 Proud to present an exclusive listing for this landmark property located in the affluent but quaint village of East Orleans. Currently a full-service restaurant, this unique and historic 1857 Greek Revival Sea Captains home, is equally suited for luxury condos boasting 1.7 acres and 5,300 SF additionally with three stories and a basement.The breathtakingly beautiful Nauset Beach, only one mile away, is one of the most popular outer Cape beaches which boasts an unbroken 11-mile expanse of nationally protected Atlantic waterfront. The beach is host to day trippers, over sand vehicles and overnight RVs. The beach has a capacity for up to 1,100 cars per day. Nauset Marine, across the street, also connects to ocean waters by way of Town Cove.Recently voted '' Business of the Year'' by the Orleans Chamber of Commerce. Voted one of the top ten Dining establishments on Cape Cod by Boston Globe, The Wine Spectator and USA Today. The Barley Neck seats 150 and has a Full year-round Liquor License and an Innkeepers license allowing for beverage service anywhere on the property.The four separate dining rooms are housed in an 1857

Listed by Richard Catania and John T Shields of The Realty Advisory Inc. 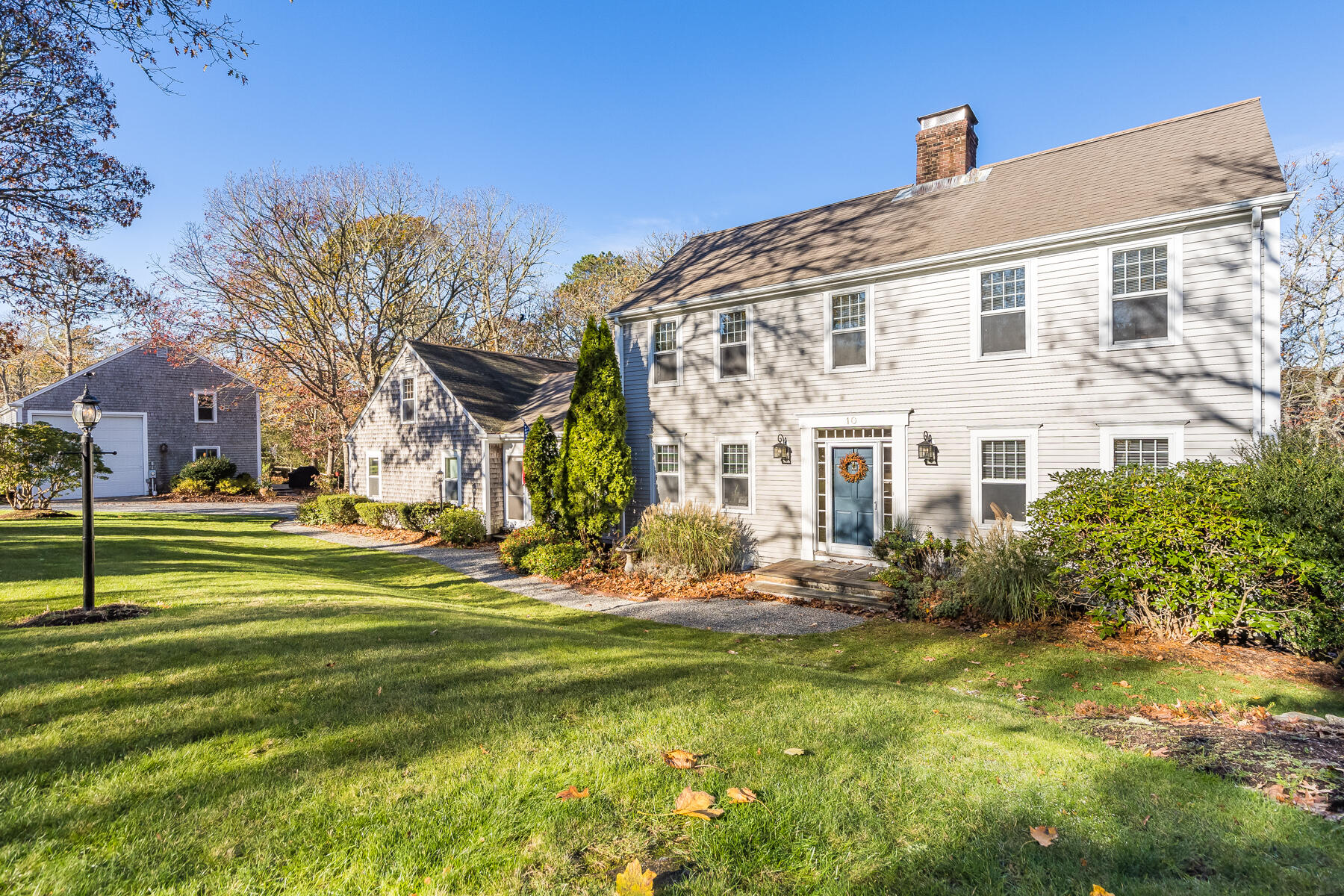 Well-kept mini estate in East Egg neighborhood with association beach, dock rights and mooring field. The main house is large enough for extended family and guests with three floors of living made up of four bedrooms and three full baths, three of the generous sized bedrooms are ensuite and one is on the first floor. The walk out lower level offers ample storage, a home gym, office and craft room or second office. The first floor of the adjacent two bedroom cottage, with separate driveway and entrance, was updated in 2022. It is ideal for overflow guests, in-law apartment or rental and commands $1600 per week in season. It also has a garage large enough for an RV or boat. Current owner pulled a permit to add an art studio above garage. Said permit and plans will convey to the new owner.This property offers great curb appeal, an expansive yard and plantings with irrigation and is ripe for the next proud owner to put their own stamp on this well-loved home.There is natural gas on the street and the IA septic system is for 6 bedrooms. 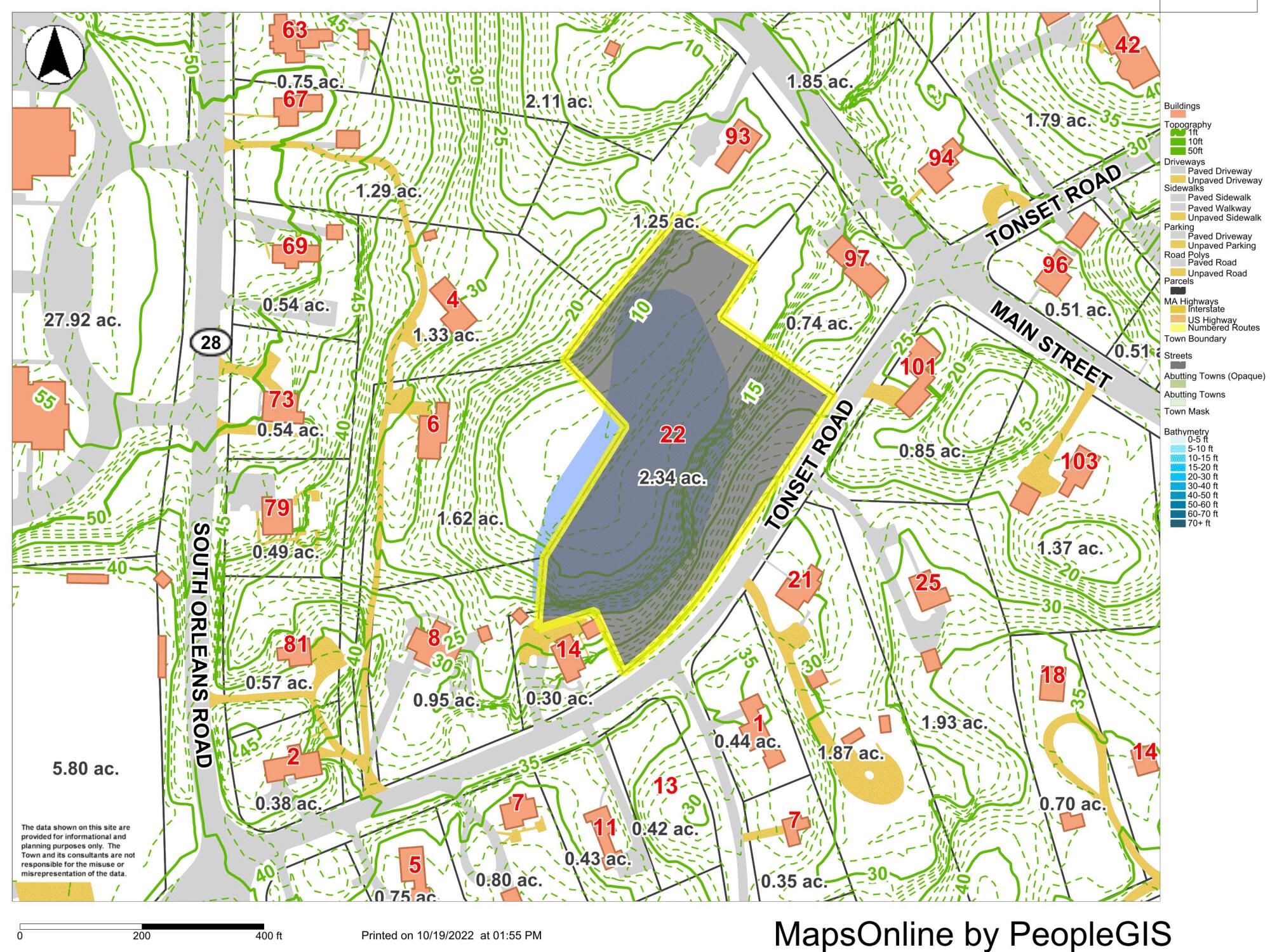 Property has some wet lands. . It may need approval from Conservation Commission for developmental purposes.

A 6-bedroom Country Home on 1.84 acres with deeded rights to a sandy beach on Pleasant Bay. Featuring an open floor plan ideal for large gatherings, this home features central air conditioning and a whole-house generator. There even is a working type 2 charger for electric vehicles. It has a great summer rental history with beds for 11 people. Plus, there is a separate year-round apartment and a small, detached shed. The property is connected to Natural Gas. Heating is via a 5 zone hot water baseboard heating system. There are also two wood stoves for the cold fall and winter nights. The large art studio would make a wonderful quilting studio, home office, or even an en-suite primary bedroom. The 2022 rental income was $88,997. Listed by Amber Dauphinais and Brian A Richardson of Orleans Village Properties,LLC

The data relating to real estate for sale on this site comes from the Broker Reciprocity (BR) of the Cape Cod & Islands Multiple Listing Service, Inc. Summary or thumbnail real estate listings held by brokerage firms other than Chatelain Real Estate are marked with the BR Logo and detailed information about them includes the name of the listing broker. Neither the listing broker nor Chatelain Real Estate shall be responsible for any typographical errors, misinformation, or misprints and shall be held totally harmless.

This site was last updated February 1, 2023 12:21 AM EST. All properties are subject to prior sale, changes, or withdrawal.

Chatelain Real Estate has chosen to display only certain towns and/or types or styles of properties. This site may not show all listings that are available through the Cape Cod & Islands Multiple Listing Service, Inc.