Median Sales prices continue to climb in both the single family and condominium markets and, as a result, we saw a considerable drop in the affordability index for Barnstable County in October.  The inventory of homes dropped less than 2% since September and the current months of inventory, 6.6, is considered a healthy amount in a residential market.  Additionally average days on market increased and percent of original sales price decreased, indicating a better market for buyers.  The strong economic metrics and assurance the Fed will raise rates coupled with booming jobs reports and increasing wages could mean some changes in the real estate market here in Barnstable County.

Hello to all and Happy New Year!  We wish you health and happiness for 2019

If we had to choose a word for December it would be: schizophrenic.  Between large swings in the stock market, concomitant swings in the mortgage market and an uncertain future of rate hikes, frankly we feel a little addled.  The local housing market however continues to show strength despite these causes for concern.  While inventory was down from November, it is up 4% from this time last year and we are at 4.8 months of inventory, which is 11.6% higher than last year.  In other words we are seeing the trend continue where inventory of homes for sale is being built back up, though slowly.  Otherwise December continued the normal seasonal slump as people spent time with family over the holidays.  We still need a bit of time to finish crunching the numbers from all of 2018 but expect to see a full year analysis in the coming weeks.

January followed the trend of the last few months of throwing trends out of the window.  The economy recovered much of the ground lost in December but still feels shaky to many investors.  As a result mortgage rates seem to be on uncertain ground as well, though they are still at historic lows hovering in the low 4% range.  The real estate market in Barnstable County is showing some interesting shifts.  Inventory is at 4.8 months, the same as December.  This is atypical for the past three Januarys which all showed a decline in inventory compared to December.  Additionally median sales price is down nearly 3% from this time last year and days on market are up by 7 days.  We are interested to see if increasing inventory and improved affordability will follow.

February saw the beginning of the Spring market on Cape Cod and the numbers tell an interesting tale.  We notice that average days on market has been steadily increasing while average percent of original price received has been declining.  It seems that buyers in the market are responding to overpriced houses by waiting longer to make offers and ultimately offering less.  We see this time and time again in smaller markets too, take an analysis we did for a client recently: Brewster Single Family sales in 2018. 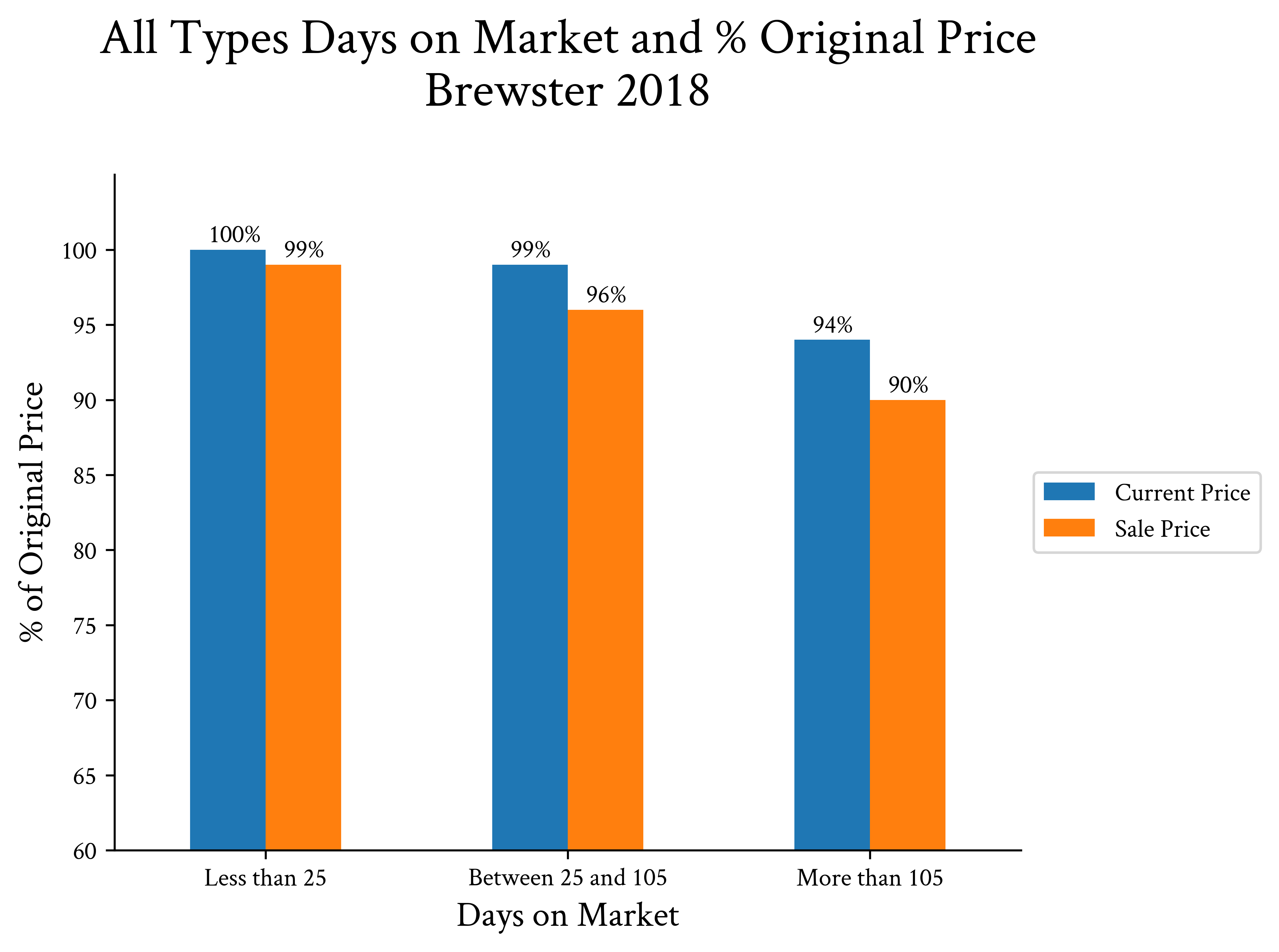 Blue columns indicate the current price as a % of the original asking price.  In other words, the price that actually attracted a buyer.

Orange columns indicate the sale price as a % of the original price.

The three groups of columns show the houses that sold the fastest selling (left group at less than 25 days), median (middle group), and slowest selling (right group at more than 105 days). 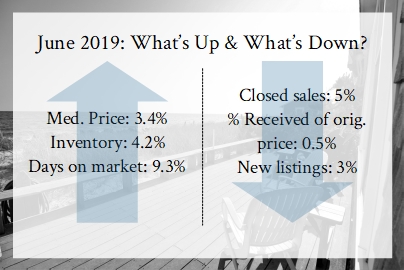 We'll go ahead and say it now, "this was a decent winter for weather."  Why does this matter for the real estate market on Cape Cod? With the seasonality of sales here an easy winter sets up sellers to get their properties on the market earlier in the year: i.e. February and March instead of March and April.  Last month inventory was up 10% from 2018 and this month it is up 15%.  This leaves us with 5.3 months of inventory in Barnstable County which, while still slightly seller favored, is more sustainable and healthy than the 4.7 months of inventory we saw at this time last year.  We do notice that the percent of original asking price received is down from last year, but up from February.  Finally, average days on market is 120 which brings up an important consideration.  Imagine paying two extra months of your mortgage, utilities, taxes and insurance. Now weigh that against a lower list price that will more quickly attract a buyer and result in a sale.  If you are considering selling we recommend working with professional Realtors so that you can devise a pricing and marketing strategy that accounts for your needs as a seller. 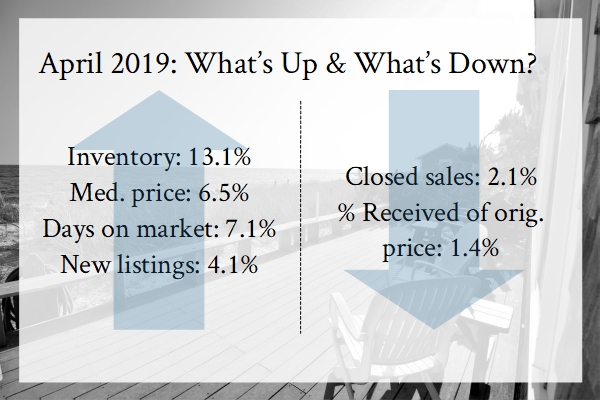 We are glad to see inventory building up in 2019.  With approximately 5.8 months of inventory of single-family homes the market is reaching sustainability (particularly favoring neither buyers nor sellers).  It is also worth noting that the year-over-year comparisons of month's supply has been up since July 2018 which could indicate that we have passed the minimum supply level in this market cycle.  However ever increasing median sales prices led to a 2% drop in affordability in April (down to 85), a point of growing concern for the long-term health of the Cape Cod real estate market.  While single-family homes continue to be below 100 on the affordability index the condominium market has essentially been increasing its affordability since October 2018.  Condominium affordability is at 144 on the index, which means Barnstable County's median household income is 144% of what is necessary to qualify for the median priced condominium. 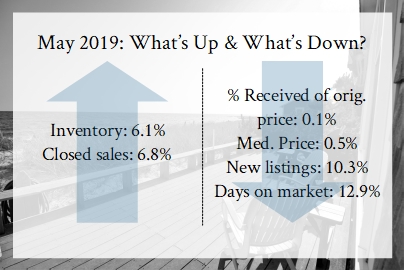 Year over year the inventory is up 6.1% and has also been steadily increasing since January.  With new listings down from last year and flat compared to last month we will be keeping an eye on how this will affect inventory going forward though.  What will also be influencing the market for the foreseeable future is the incredibly low mortgage rate.  At the time of writing Cape Cod Five and the Cooperative Bank of Cape Cod both have their 30 year fixed mortgage rates at 3.875%, which is exceptionally low and certainly an aid to buyers.  Furthermore the median price for single family homes is essentially flat from this time last year and only slightly up from last month.  Do we know what the future holds?  Nope.  But we can say that right now the market is fairly well balanced between buyers and sellers which means it is a good time to both sell and buy. 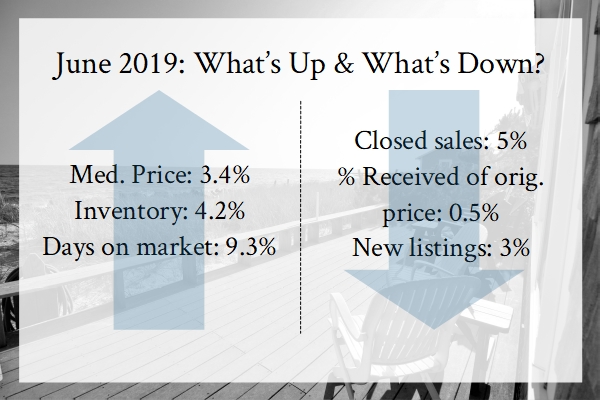 Compared to this time last year median price and inventory are both up.  However Inventory compared to May is a small gain of only 25 homes.  It looks like the market entered the summer slow-down a bit earlier this year (usually it hits in July) with closed sales and new listings both down in June.  Apparently sellers were already getting ready for the beach last month.  The ever growing point of concern, not only on the Cape but nationally as well, is the affordability and availability of homes.  The Realtor professional publication states that the inventory shortage has reached 2.5 million homes.  Through normal economic interactions, such a severe deficit in available housing will continue to drive prices up as well as affect the rental markets (see California and New York's new rent control regulations).   The Realtor article features a few solutions and while none are new they will all be important to relieving the housing shortage.  Read more about ADUs, Opportunity Zones and more here. 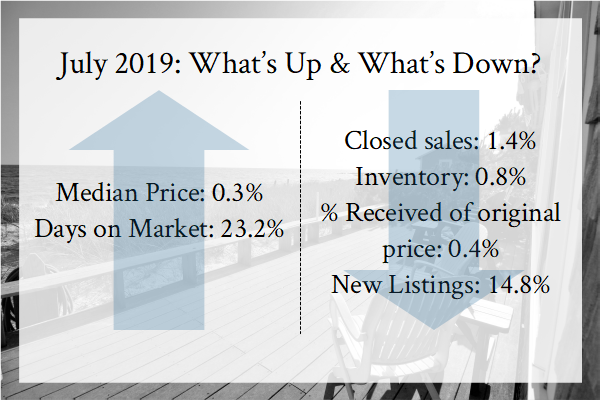 Compared to this time last year, July saw only slight variation in four of the six metrics we investigate for this blog (pictured at right).  Days on market was up significantly compared to this time last year; however it was down compared to June.  Additionally the number of new listings was down nearly 15% compared to last year and lost about 9% compared to June this year.  With all of this in mind we are seeing a normal decline in market activity due to the seasonality of our area.  Nationally, mortgage interest rates are exceptionally low yet affordability continues to be a serious concern. 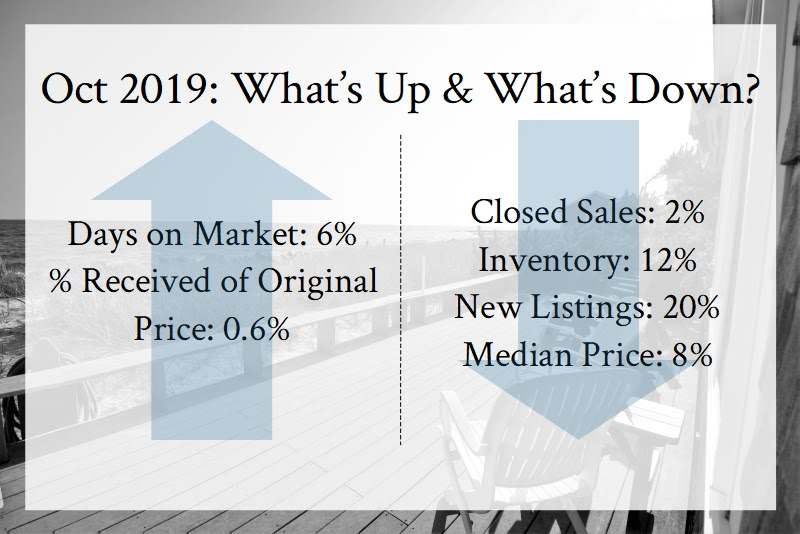 In October Barnstable County saw more of the fall slowdown with a significant reduction in new listings compared to this time last year.  Additionally new listings are down 5% year-to-date continuing the trend of historically low numbers of homes for sale.  Despite this the October market largely kept pace finishing with 5.7 months supply of inventory available.  Remember that 6 months is the magic number for a sustainable market between buyers and sellers.    Single family homes have not seen significant gains in median price since June and the affordability index has gained 20% since the start of the year signaling good news for buyers.  In addition continued low mortgage rates (~3.625% at time of writing) helps buyers looking to get into the market.

We will continue to keep our eyes on the amount of inventory as well as the months of supply available Cape-wide.  However we can't stress enough how the entire County is not representative of market niches.