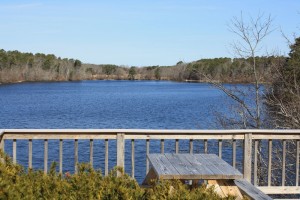 In the beginning of April, trout raised at the Sandwich Fish Hatchery are released throughout Cape Cod and the rest of the State. The hatchery is the oldest in the Country and houses about half a million fish. This year 5,500 trout were released into Scorton Creek between Barnstable and Sandwich. For more information on the hatchery see www.mass.gov/dfwele/dfw/index.htm.

There are many opportunities for anglers on the Cape from deep sea fishing, surf fishing to freshwater trout and bass fishing. The Bass River Rod and Gun Club in Yarmouth Port even sponsors a fishing derby (June 5th) this year. The Rod and Gun Club also holds a traditional Cape Cod clam bake open to the public every summer.